Blackwater aquarium aquascape is getting more popular each day. However they can be tricky. They usually cycle longer and you need to add appropriate amount of botanicals according to the water volume. You have a wide range of conditions to experiment with. Some people use peat moss to lower the ph even more, then adding some calcium and magnesium containing rock into the filter to balance it out and add some hardness to the water. True black water aquariums are usually tough for plants, but it can be done depends on what are you trying to achieve.

Below you can find a pictures from the making a  7.8 gallons cube blackwater aquarium aquascape . Making an aquarium you can spread to a few steps. First one is a planning – it is a time when you think about what would you like to create. Are you recreating ecosystem from certain geographical area, or certain section of the river or lake. You can search pictures of natural habitat to see how does it look in reality. When making plans use your imagination or drawing skills to create a picture of how will your tank approximately look. Another way is gathering hardscape and creating something from what you already have. 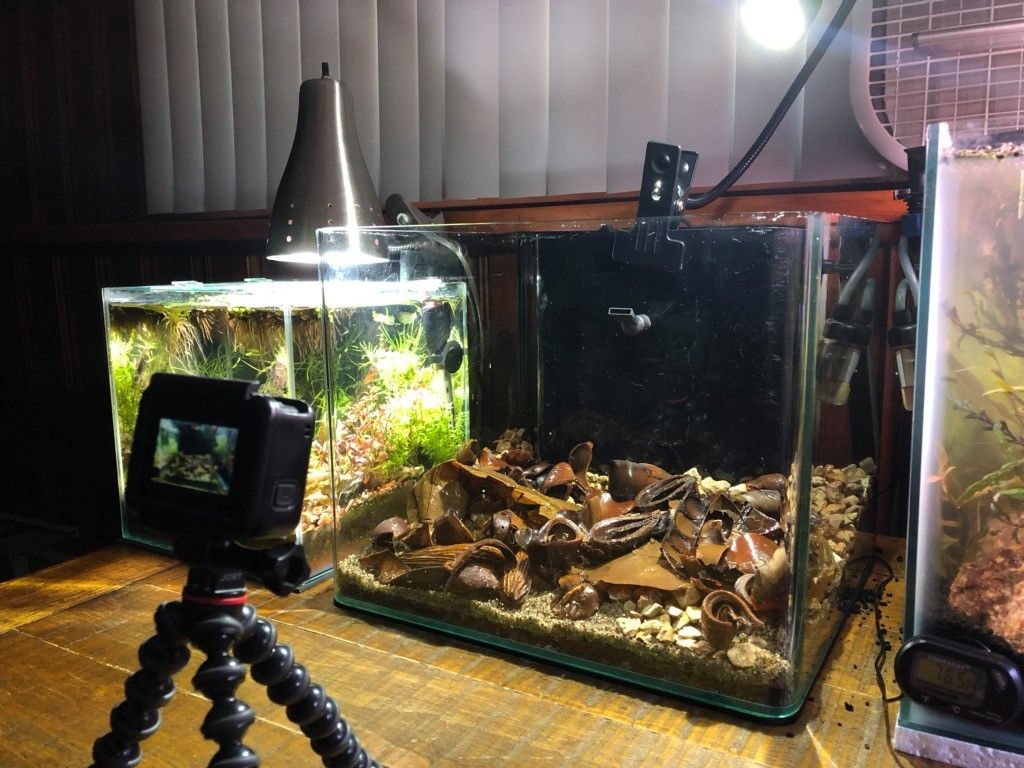 In order to recreate natural blackwater enviroment you need a  botanicals  coming from that specific region. You can always make a blackwater aquarium setup from native botanicals  like alder cones and oak leafs, more below:

In this setup I used what I could get but basically all the botanicals I used comes from the area I was trying to recreate –   Igapo Rio Negro – upper part of Amazon river  (the largest blackwater river in the world). 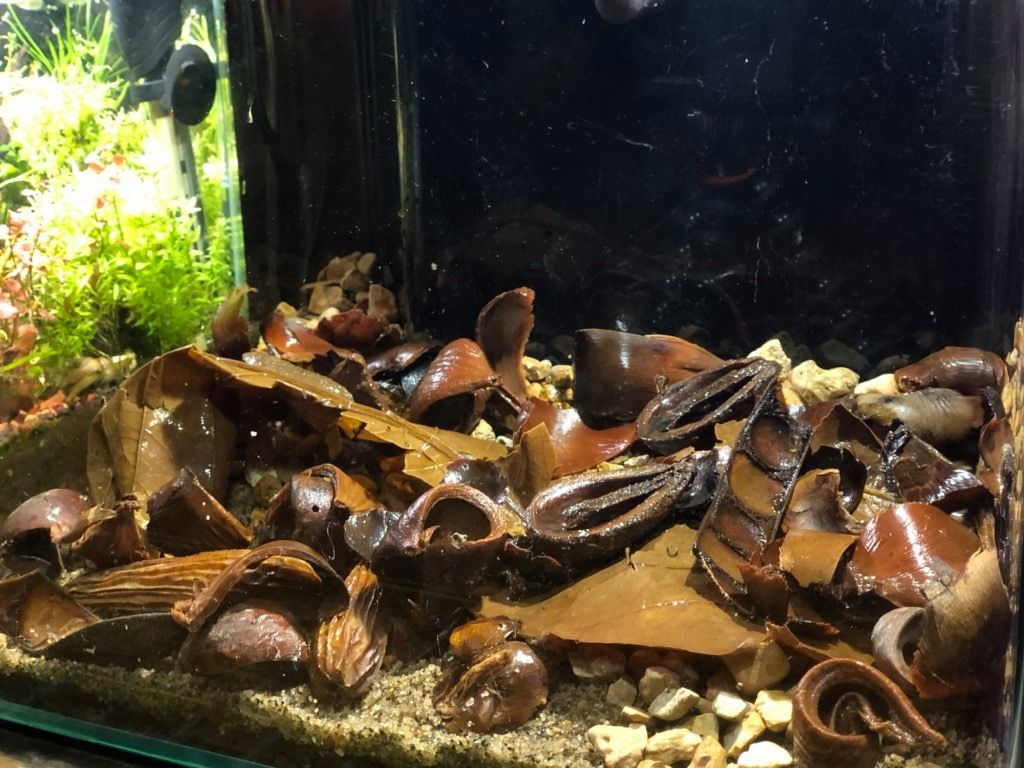 The botanicals I used are:

I was boiling all botanicals for about 60 minutes, except almond leafs(catappa leafs) which I put inside for the last 15 minutes. The pot I was boiling it in was covered. The water which I had left after boiling I placed in a plastic bottle after it cooled down. Then I put all botanicals into the big bowl with dechlorinated water and soaked it in there for 24 hours. I did not have to use any of the water I had left from boiling. Just the one I used for soaking it. The one from boiling I am planning to use as an supplement extract during water changes to achieve natural look and add some humic and fluvic acids into the water. 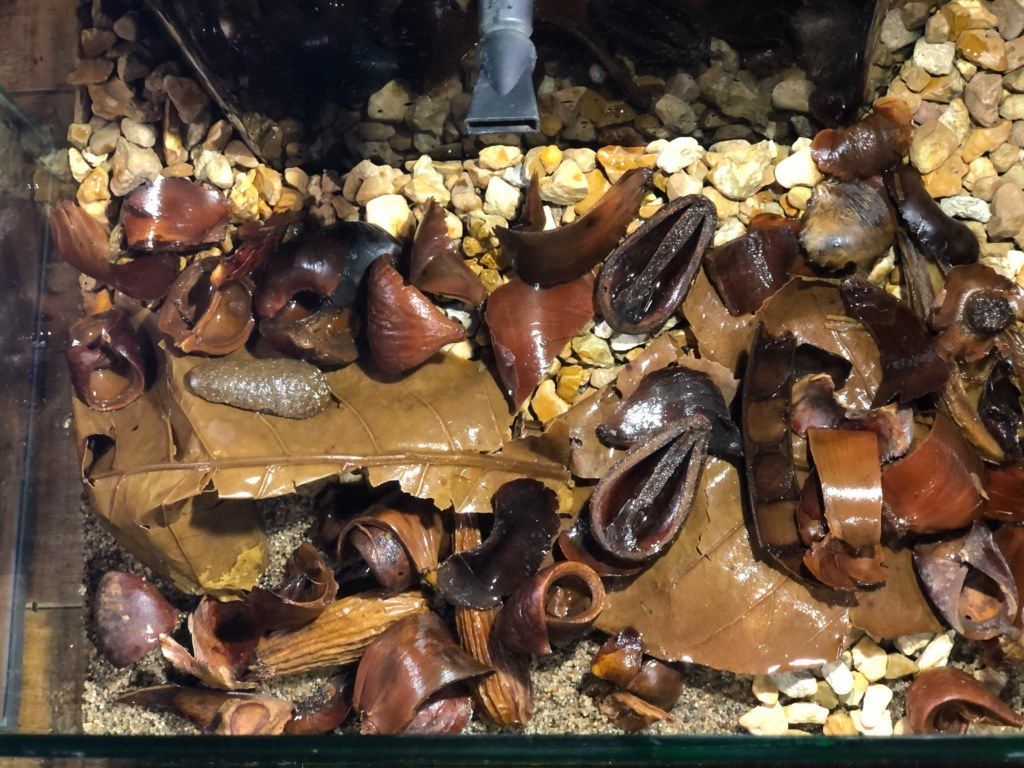 I did not make any pictures from making the substrate layers but I will upload the video of the whole process in the future. As a  substrate  I used mostly regular sand, but you can find in there a small layer of charcoal, small layer of ADA substrate, and very little of regular dirt and worms castings. I added 2 scoops of bacter AE to help with creating biofilm for bacteria in the substrate. In some areas and mainly in the back I added sunset stones from the local garden store (lurvey’s). The goal of the stones was to add a little high in the back, seperate botanicals from the soil a little so it can better ‘breathe’, and cover a little 2 bottom inflows to overflow (there is 4 of them – 2 on the bottom and 2 on top in this aquarium).

After adding water it all started looking good. As a  hardscape  I used  black spider wood  – two pieces connected with each other with a zip tie. The goal was to achieve a dramatic look and still be able to clean the tank when needed by taking out the roots. On top of the roots I am planning to add some marsh plants which likes to have roots submerged only.

In the substrate I planted two  red tiger lotus bulbs  which I bough from petco (imaginary brand). It is funny because when I opened the bag with the bulbs some kind of insect flew right of it. I’m also thinking about adding a little bit of floating plants to help with the ammonia and nitrates. In lower ph conditions ammonia is not that toxic like in higher ph, but in lower ph nitrifying bacteria have much harder task to grow and multiply. Therefore I will depend on water changes, plants and zeolite rocks in the future to better manage the waste. 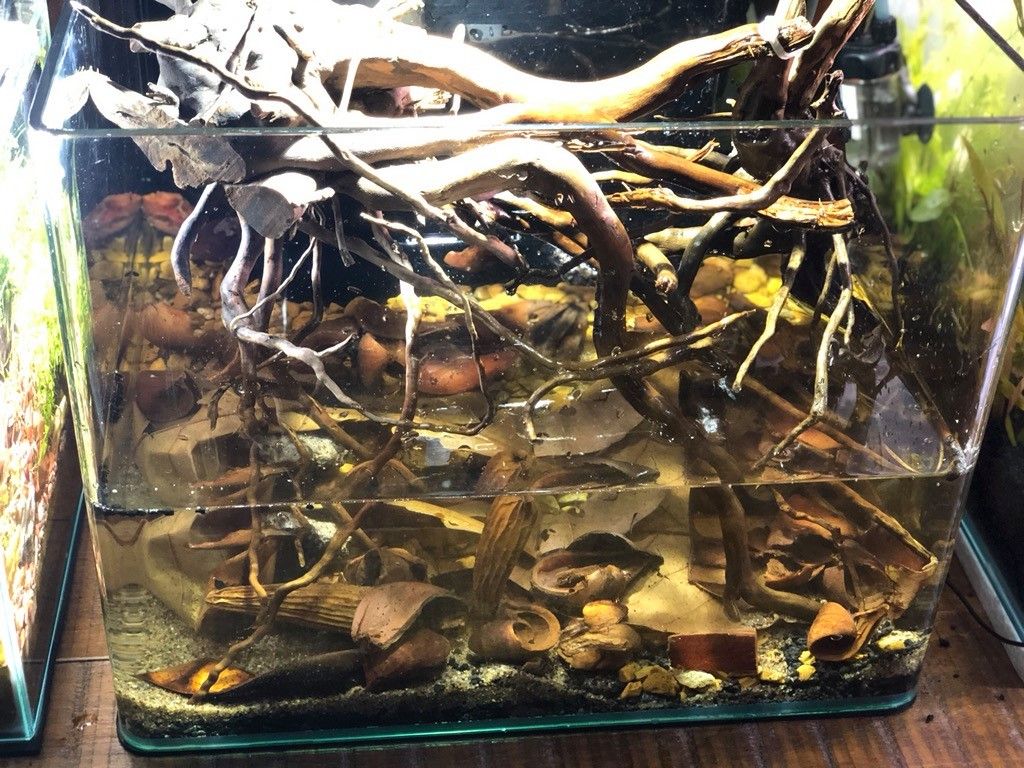 Finally After refilling the aquarium, I added the remaining water from soaking the botanicals for 24h. It immediately created dramatic look I was hoping for. In the next few days I had to add a small power head and face it up on the water surface to prevent creating a film on the top of the water.  My goal  was also to oxygenate water better which would also rise a ph a little(in theory) so the beneficial bacteria have easier task to jump start filter and substrate. 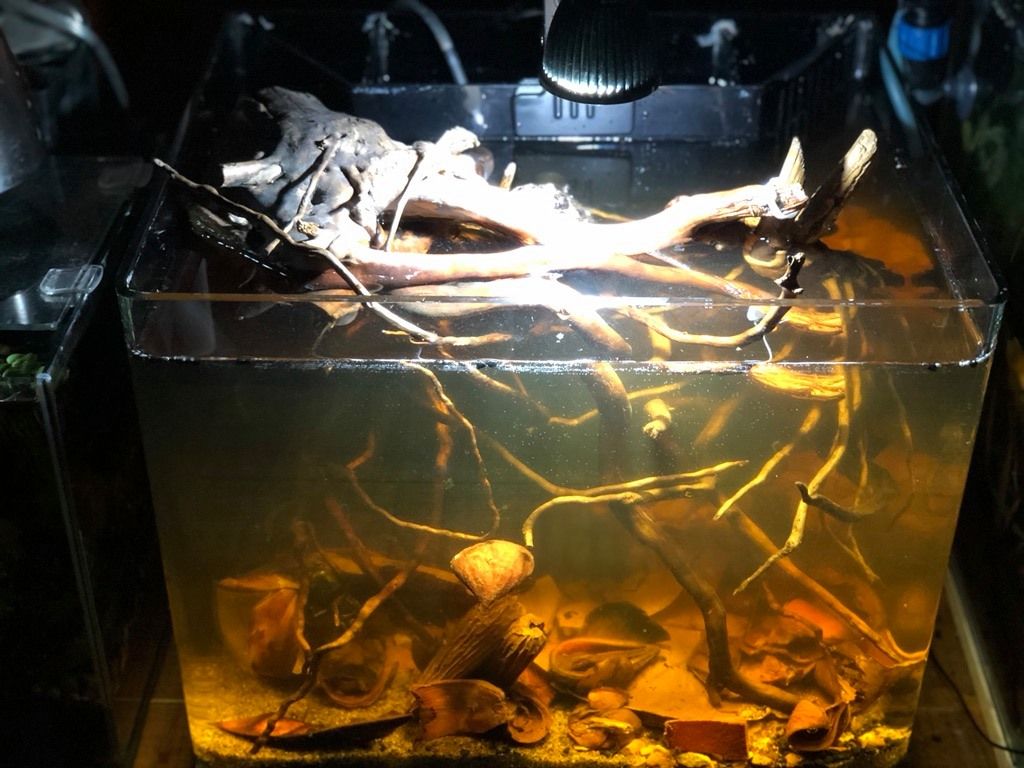 The tannings  can be easily reduced by doing a water change. The more botanicals you add the more tannings will be leached into the water. You wants to maintain the dramatic look while still being able to enjoy your fish. Thinking of stocking this aquarium – I still have some time and I’m assuming it will be cycling quite a while. I’ll give it 3-4 weeks.

The first option I was thinking about was a betta fish. Some flame red or white color betta would be a great addition. It’s color would be enhanced be the dark color of the water. Second option is to get 2-3 small groups of fish. I belive it could be a good habitat for a pygmy sunfish or electric blue rams, pair of appistograma, but I think I would be more happy with a few khuli loaches, corydoras and sparkling gourami or congo tetras.  Let me know what would you stock in there!! 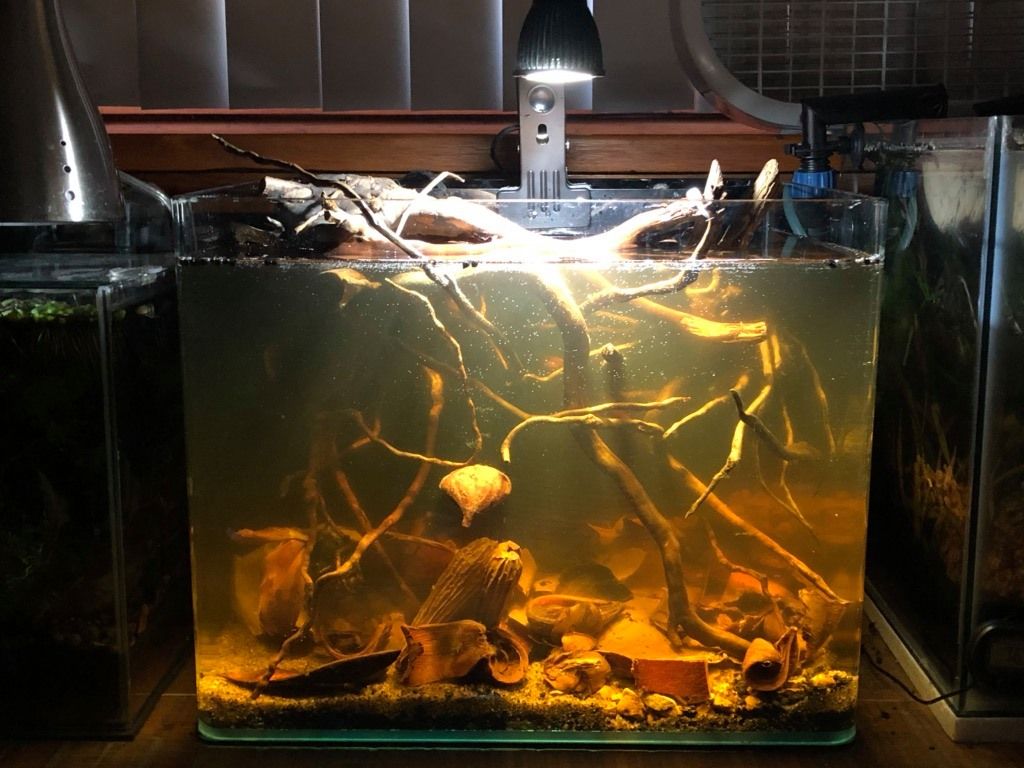 Here is a closer look. Aquarium was just filled out but I love the way it looks already. Interesting fact is that during boiling all the twisted botanicals straighten out and all the open pods became more curly. I guess that is how you recognize if someone boiled their botanicals or not. I can’t wait to see the fish grazing and moving the botanicals around or disappearing  in the dark in one spot and coming back in another part of the tank. For sure the plants will add the final touch to it and the same with the plant roots. I hope the tiger lotus will be able to make its way up thru the darkness. I used  5W LED light  in there which has about 500lumens. It’s not too much but once the surface agitation is bigger it creates really cool shimmering effect. 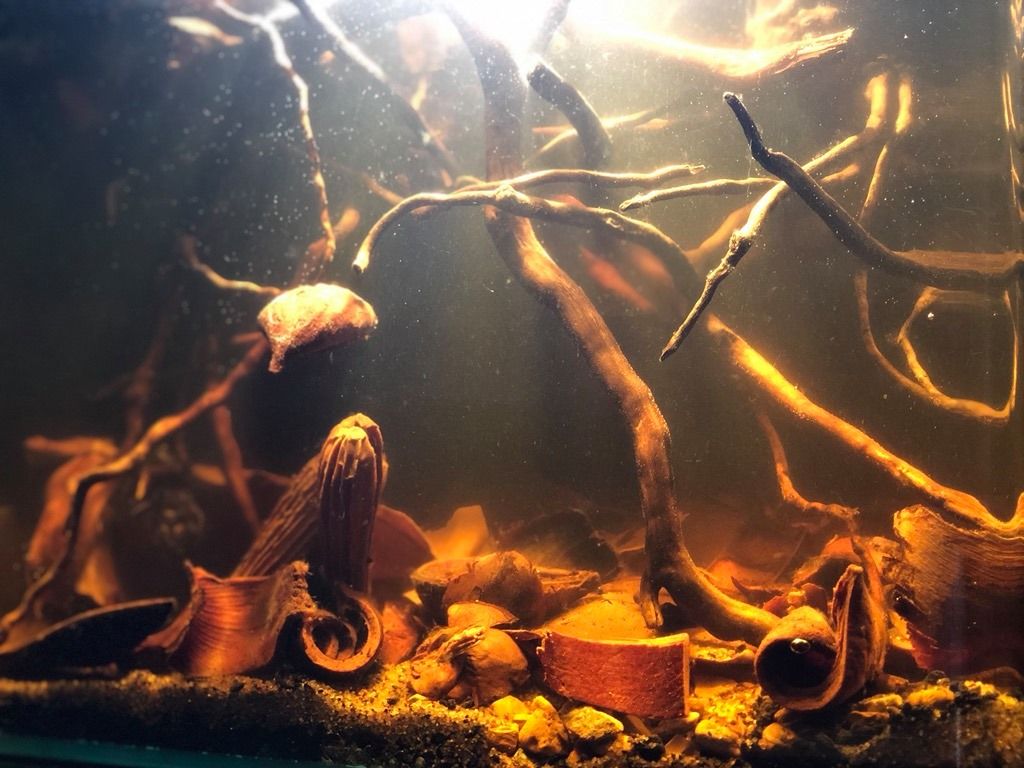