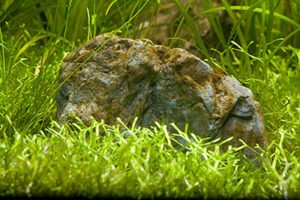 I knew that I didn’t have enough substrate and I had to add some more, but how when the aquarium was already ready and established? I decided to buy one bag of eco-complete substrate, pump the water out, very delicately added the substrate to my tank and added the water back to the aquarium very gently. Shortly after this is where my problems began. I didn’t wash eco-complete substrate because I read that there are beneficial bacteria’s…no comment…and after that for the next few days I experienced diatoms algae that diversifed all over the aquarium. It was everywhere, walls, substrate, stones, and what was even worse, on every plant. I guess I disturbed biological balance in the aquarium, by adding new substrate with bacteria. It went into cycling again, this time with diatoms.

Me vs diatoms algae

Diatoms covered most of my plants! I started fighting with it. I was cutting off all the leaves covered with diatoms. Three plants suffered  the most: mint charlie, golden nasaea and hygrophilia’s. Luckily, rotala macrandra and althernantera reineckii somehow were immune to it. Every day I was wiping it off from every possible surface. When I was wiping the walls I would use a new cotton ball for each side. When using the cotton balls, dont lift up from the wall until you are done because it would then release all the diatons back into the aquarium. I carefully removed the cotton ball and threw it away then moved on to the next wall. I was cleaning the stones by scrubbing them with a toothbrush. My plants had less and less leaves everyday.

After cleaning, I was doing 25 % of water change every day for a few days. Meanwhile I cut fertilizers about 1/3, because plants covered by diatoms algae couldn’t use all this microelements. Everyday I was also squeezing all sponges from the filter and powerhead into the bucket with a little bit of water from aquarium. I didn’t see a significant difference, until I noticed that during water changes by vacuuming substrate, situation became better. Unfortunately, it wasn’t enough, because some of my plants still looked very poor. I regret that I didn’t make any pictures that time, but I felt so angry that all I was thinking was ‘what else can I do to save my plants and recover stabilization?’

Amano shrimps and Otto: The builders

I was desperate, so I decided to hire some useful, hardworking creatures to help me – amano 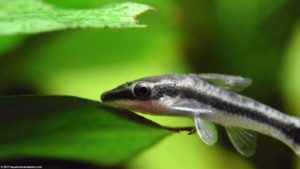 shrimps. At the local store I bought 5 of them for $4 each. I saw that it was good, I was like ‘why didn’t I choose this step earlier?’  It was building back stability in my tank.

Hour after hour I saw how my leaves, one by one were getting completely clean ! That was awesome! I summoned some reinforcements to help them in this battle. Otto otocinclus(sucker fish), 3 of them as well as 2 cory’s just because I wanted to have them in the future.  In the other tank, I already had 3 of them and I was thinking about moving them there. For now I wanted to check what it could do for my tank that was suffering from diatoms. The Otto’s were doing also very good job! While amano shrimps specialized in cleaning all the leaves, Otto’s were also cleaning all hard surfaces like my stones and driftwoods.

I won the battle, but it was a long lesson.