I really liked the idea of aquascaping and ‘planted tank’ term. I decided to look around the fish stores to find all I may need for my ‘monster aquarium’ set-up. At this time I was under influence a few pictures which I found in some magazine and online and I liked the most. I went to a very nice fish store in Skokie and I told them about my idea. One of the older guys sat down with me and was listening what my vision is. He really looked excited that I have such idea and pointed me into a good direction, as well as gave me some advices. I saw this beautiful piece of driftwood which would fill up almost whole aquarium and I decided to cover it completely with moss. Willow moss was the main plant I chose, however till now I’m not sure if that was a true willow moss, as not long ago I got a completely different willow moss. I guess there are many kinds of one plant.

As a substrate I chose CaribSea Flora Max for planted aquarium substrate from petsmart for $16.99. For my 20 gallons I used 2 x 12lb different packages. This gave me 3 inches of substrate on the front and 4 inches from the middle to back. From what I know it’s like a recommended level of substrate for planted tank, but it’s not a written rule.

However from my experience I know that it’s much easier to plant and for plants to shoot bigger roots, when there is at least 4 inches of substrate. More I think would cause that too much waste would accumulate in the substrate and there wouldn’t be any movement on the bottom so probably some bacteria would start to grow in there, or too much phosphates would stuck there.

I bought a driftwood for my monster aquarium in the local fish store for $36 (which you can see at the attached video on the bottom of this post) and I decided also to buy a power head ($22) to improve a little circulation and filtration by turning it on from time to time.

Water flow you can see on the video below. As a filtration I had just a regular filter which I got together with aquarium aquaon for 20 gallon tank, but later I bought on sale in petsmart marineland C-360 canister filter ($80) and I was using both filters for a few weeks, until a new canister filter grew up with good bacteria. I was worried that This filter might be too big for my 20 gallons tank, but it all really depends what do you have in there (if you want’s to know more about filtration for sure you will find it on this website).

After a 2 months my aquarium was overcrowded and I had too give away some fish to my friend and If I wouldn’t have such a strong filter it would be very hard to keep a good conditions in such a small aquarium. There is a rule that filtration should be around x10 bigger amount of gallons per hour than is in your tank, and I can totally agree with that! What was the most important, I bought a new light!!

From the basic led which I got together with the cover I switched to Finnex Planted + and what I have to say, it is amazing !!

Me review of this light you can also find at this website. One advice, leave it on 24/7 mode (if you use co2, otherwise 7-8h on daylight setting or max), it will save you additional problems…

I also consequently  started using fertilizer seachem fundamentals  pack. One advice, I was measuring amount of the liquid in the cap as the instruction says. I noticed that I could of add less than recommended amount says. The second, If you even don’t have to make water change too often because water is ‘clean’ using fertilizer you need to change 40-50% of water every weak to avoid some sort of ingredients build-up(At this time I didn’t even know about this term yet).

I was changing only 25 % of water every week or around 30-40% every 2 weeks only. All my parameters were fine(I had very good filtration). I was adding consequently fundamentals pack, and everything was growing like crazy. However since I didn’t change enough water I had algal bloom (green water). it was scared, I wanted to have everything perfect and then this happened.

I had to fight, I did immedietely 50% of water change, I cut fertilizers to 1/2, and 3 more times other days I did small 20% of water change. I felt disappointed and one of my fish even looked like a little ball pomped with water. Had to remove it from aquarium because I found out that probably it won’t make it and may contaminate other fish. What can I recommend is, be patient! Don’t panic and everything will be fine 😉

Upgrade to a monster aquarium without any waiting time

I washed my substrate in the bathtub by cutting the top of the bag and making like a hundred holes in the bag where the substrate was by using a fork. I washed it like a 5-6 times until water seemed to be almost clear. Took my driftwood and I glued willow moss which I bought to the end of the branches. using seachem fluorish glue, but simple superglue would work too.

If you care about the details use a green thread, but on the beginning glue is much easier and it isn’t visible later when the moss will grow. I sucked out water from my actual tank(in order to use it in my new aquarium) to the bucket from home depot (let’s do this!), took all plants, fish, driftwood and stones  out. The last bucket with all the junk from the bottom I dumped to the toilet.  At this time I got:

Time to put this all together

I added substrate, placed my driftwood with the moss, placed heater, filter(as you may know I had stabilized filter from the same aquarium) and power head. Then I slowly added 3 buckets of water from previous aquarium plus one 5 gallon home depot bucket of fresh water with some chlorine and chloramine remover. I planted all plants and after it was cycled added fish to the aquarium.

What is important that it may take you much more time than you may expect, like 3 hours. Don’t forget to plug in some filter or at least air pump in the bucket with the fish. I didn’t do it and in the middle of it I noticed that my fish are breathing heavily and if I wouldn’t do anything with it could of died.

I planted my brown cryptocoryne temporarily in the back. It could have a little bit less light, this is very good move. This plant doesn’t like too much light and if it have more light, even if it grows very well, algae are growing on it. During this 2 months I added also two plants, rotala rotundifolia and heterantera zestrofilia (star grass). Review of all plants I had you will find on this website too. 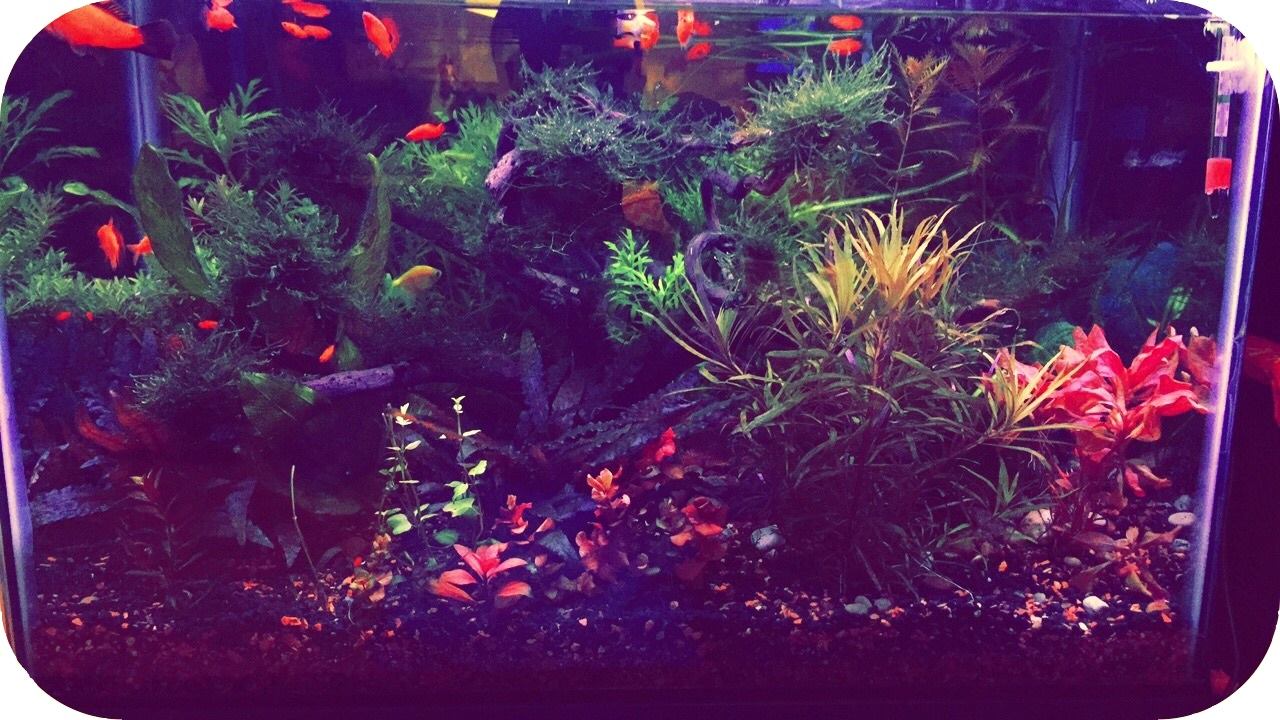